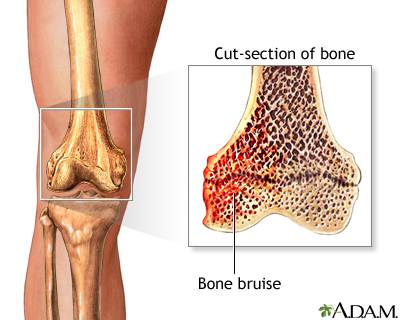 Today We Learn About Bone Bruises

My goal today is to educate people on Bone Bruises. The reason I am addressing this issue is that I have seen 2 or 3 patients lately that have had bone bruises, and a few of my fantasy football players have ended up with them as well. It is a common injury that can cause some real issues if not handled well.

The first thing that usually comes to mind when one thinks of a bruise, is a black-and-blue discoloration on your skin. That familiar purple, blue, yellow mark is the result of blood leaking out beneath the surface of your skin after blood vessels have been injured.

A bone bruise or a bone contusion, occurs when you have a small injury on the surface of a bone. The discoloration appears as blood and other fluids build up. It is  possible to bruise any bone, but it’s more likely to happen to bones that are close to your skin’s surface.

Symptoms that may be suggestive of a bone bruise include: stiffness, swelling of the joint, pain and tenderness that persists longer than just a normal bruise, or trouble using the injured joint. For example, a bruise on your knee joint knee can lead to swelling, edema, or a buildup of fluid on the knee, which can cause increased pressure at the knee and be painful. Depending on how the injury happened, you might also have damage to nearby ligaments. Bone bruises can last anywhere from a few days to a few months.

Depending on how involved your injury is, a physical therapist may be able to help you gain some strength to the injured area while it heals in a proper manner so as to not cause any further damage. If the bone bruise is minor, your doctor may recommend rest, ice, and pain relievers. I generally tend to try to avoid medications and inactivity if it can be avoided. If your left knee is hurt, the rest of your body can still move, we just may need to adapt what the left knee does when exercising. If the bone bruise is not healing, you may need further diagnostic testing to rule out any other issues.

Bone bruises can be painful, but they are not the end of the world. They can also really screw up a Fantasy Football lineup! Sam Bradford has a bone bruise that will keep him out 2-4 weeks. Melvin Gordon has a bone bruise that will not keep him out any time. It all just depends on the individual and the extent of the injury. The moral of the story, is don’t let this kind of injury bruise your ego. (See what I did there?)