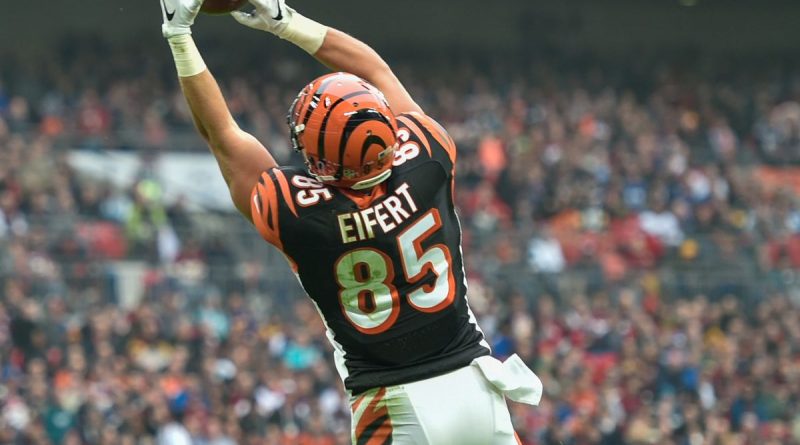 Today’s Throw Me The Ball Thursday Blog Post: TE…No Not Tight End…Tyler Eifert…Oh Wait…(see what I did there!?!) Tyler Eifert was a fantasy stud in 2015. The Notre Dame product reeled in 13 TDs in 13 games played. Talk about efficiency! The former first round pick obviously has a ton of talent but has been riddled with injuries since he’s been in the NFL.

Tyler Eifert is very much like Jordan Reed. He has never played a full season. Eifert was only able to haul in four catches in two games during the 2017 season before he was sidelined with a back injury that eventually required surgery. This was Eifert’s third back surgery. He had one in 2009 at Notre Dame and another before 2017’s Training Camp. It was announced on October 11th that he was having season ending surgery although players have suited up 6-8 weeks after disc herniation surgeries.

The Bengals gave a 4-6 month timeline for Eifert which was very conservative or indicated a more serious surgery. He was re-signed by the Bengals as a free agent after his rookie deal expired. In March, Eifert told the media his back has returned to full health but he was limited in OTAs. Eifert was moving at “half-speed” and didn’t participate in 11 on 11 drills. He said it was part of the rehab process although Head Coach Marvin Lewis was “surprised” at his absence. Eifert is another high risk high reward TE for your fantasy team. He has a long injury history but if he can lace up for the majority of the season, he can be a top 5 TE.

Much like Jordan Reed, I am not very confident in Eifert’s ability to stay healthy for an entire season. He has potential, but he is just not on my list of Tight Ends I will be targeting this year mainly due to his plethora of injuries and the slow pace on his rehabilitation. The durability is a major concern for Tyler Eifert. Leave a comment with who you would like to target at the Tight End position!