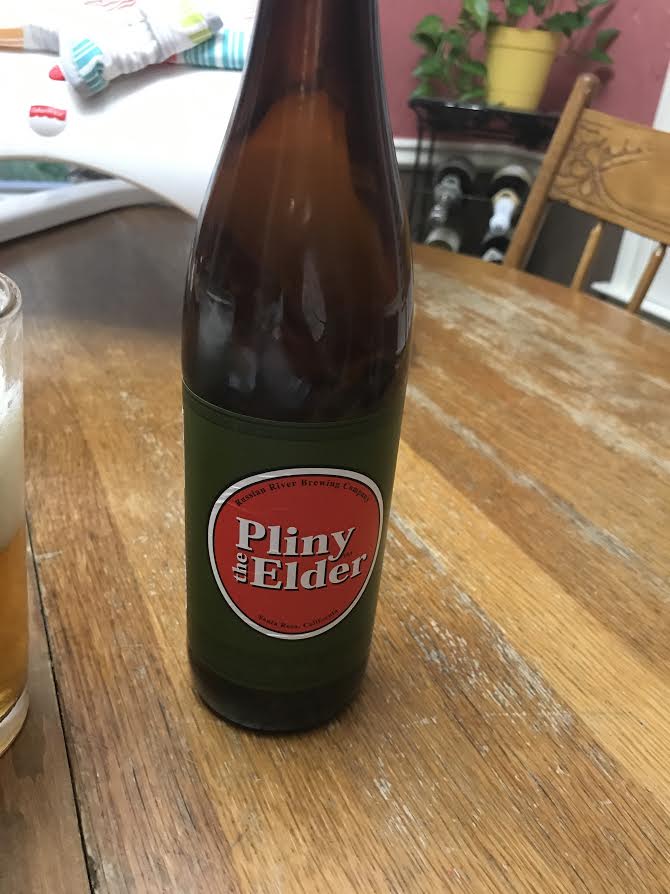 So after completing my 30 day experiment of Whole30

eating pattern and trying to “pre-train” for Crossfit, I fell about 5 lbs short of my start up goal. Which is fine because I was happy with my progress, but in the two weeks I was off from Whole30, a lot happened and I regressed a bit.  It was my 38th birthday, we had some friends in town, and we celebrated a little too hard. I gained about 5 pounds in those days, but again, I was not really worried about it because I am ready to get back on the grind and accomplish my goals. A lot of this was brought on by my beer consumption, but as you will see in the upcoming blog posts, when you have a beer like Pliny The Elder sitting in your beer fridge for almost a month, you really can’t be upset when its time to actually drink it!

One of the things I got to enjoy for my birthday was this beer I had been dying to try for a long time…Pliny The Elder has been on my radar for such a long time it had become a bit of a quest for me.  A friend of mine from High School (who I need to find a way to link to in here and give him the proper credit he is due) has a couple of key hook-ups and was able to procure for me a Pliny the Elder, and friends…let me just tell you…Beer Advocate has it currently ranked as the 19th best beer in the world, and I can honestly say that it is worth the hype. I have tried a handful of the top 20 beers on the list, and you will probably hear more about those in future posts, but for now, I can say that Russian River Brewing Co. has done it right. Pliny The Elder is ultra hoppy (which I usually don’t like) but it is so smooth for so long that it takes an 8% ABV (high alcohol content) beer and makes it delicious with just a subtle hint of bitterness and sweet citrus aftertaste.  I don’t get into too much detail on drinking my beers, just some flavor tips and what I liked or did not like about it.  I long to try its sister beer Pliny The Younger, but I hear that is only available fresh from the tap. More to come on that quest in the future.

WHAT I LEARNED TODAY: Don’t ever feel guilty for getting off track or having a good time when it comes to health goals. Drink a beer or two…or seven…but do it with friends and family, and good company, and do it responsibly and in moderation. Then get back on track and work on crushing your goals.