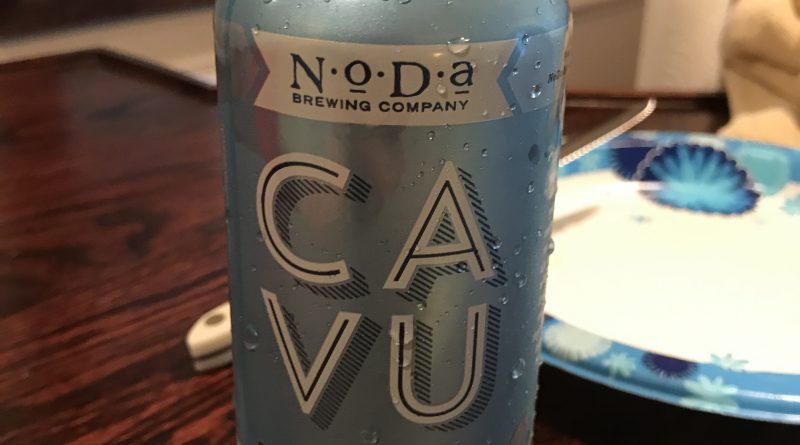 Another beer I was able to try while on my Fantasy Football Draft weekend with the fellas brought me back to my old stomping grounds of Charlotte, North Carolina. There is an area I used to frequent in the Charlotte North of Davidson street. This area is more affectionately known as NODA. It is a food, music, and arts district, but more recently it is the home to NoDa Brewing Company. I have tried several of NoDa’s beers, but this was the first time I got to taste CAVU

This beer was super light. I was very grassy, and wheat tasting, with a good hint of fruits, flowers, and citrus. This wasn’t a grapefruit citrus like many of the IPAs I had consumed lately, but more like a lemon or lemongrass taste to it. Overall it was enjoyable, and I could see drinking a lot of these in the summer time by the pool, but it was not an overwhelmingly distinct beer. I feel like some of the other NoDa beers like their Hop, Drop, and Roll and their Coco Loco have much more flavor profile to them. But if you are ever in Charlotte, NC, I recommend you stop by the NoDa Brewing Company.

In reflecting back on that Fantasy Football Draft weekend in Raleigh Durham, NC, and having a beer from my old stomping grounds of Charlotte, NC, it amazed me how familiar it all was. It had literally been years since I had any NoDa brews, but one sip and I began to remember some of the flavor profiles, some of the fish tacos at Cabo Fish Taco, and some of the many Joe Firstman shows at the Neighborhood theatre. So go out and do some reminiscing and take that trip down memory lane. It is good for the mind, body, and soul sometimes.