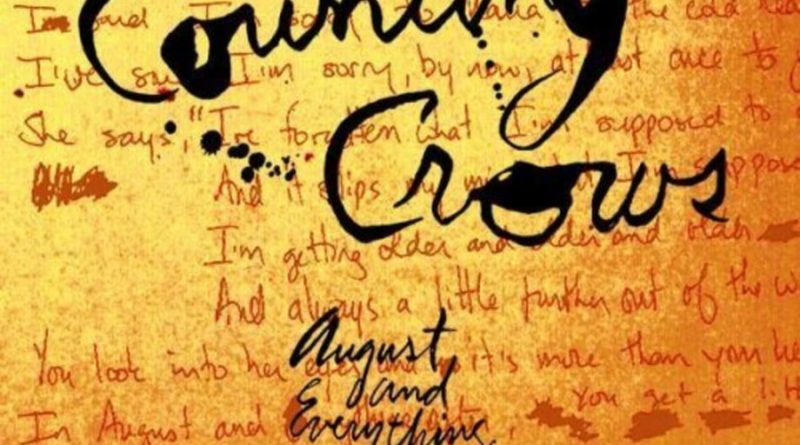 Life Changing Album: August and Everything After by Counting Crows

For those of you who know me, you know that music is and always has been a big part of my life. Whenever I had some free time it was spent at concerts, and whenever I had some free money it was spent on records, cassettes, and CDs. There are so many musicians who have helped shape me, and whose songs have helped save me. Many of these musicians I now call friends and acquaintances. But there is usually that one album that you just always hold above all the others as the one that changed your life.

High School for me was fairly cliche. I enjoyed it, made some great friends, and then it was over. My mother and father had done an amazing job raising me and my brother up on The Beatles, CSNY, Led Zepplin, Aerosmith, The Beach Boys, The Grateful Dead, Bon Jovi, Bruce Springsteen. Bob Dylan, and a host of other classics. But the first time I heard August And Everything After

, by Counting Crows I knew I was listening to THE quintessential song writer of my generation.

Without Counting Crows, I never learn about Whiskeytown while working as a college radio DJ at Wake Forest University. Without Whiskeytown, I never meet my one of my musical idols Ryan Adams several times through the years. If it were not for Adam Duritz and his song “August and Everything After” (which coincidentally never even made the album) I likely never join a Counting Crows message board.

Without August and Everything After, I like never meet my wife, and some of the many friends I have made along my musical journey. I likely never choose the middle name Duritz for my son. And most importantly, I never learn to truly hurt and grieve properly during “A Long December”, the month in which my father passed away.

The best part of this blog is that the answer will be different for everyone, and for different reasons. I love incorporating music into my day and into my daily treatment sessions with my patients. But most importantly I love incorporating their music into their treatment because it strikes a chord with them for a one reason or another, and I love hearing they why behind that story. I have still not been able to find a physical hard copy of the single “She Don’t Want Nobody Near” which has the song “August and Everything After” on it, but I have two or three versions of the song itself. But the album will always mean the world to me.